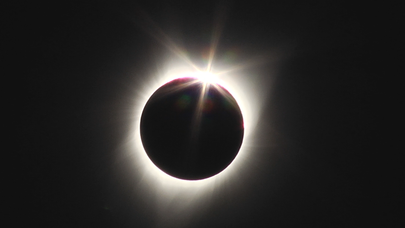 The sun represents the right eye. The moon represents the left eye (which I’ll explain). When the sun is alone in the sky, or “SINGLE” in the sky, the world is full of light. But when it “marries” the moon during an eclipse, it’s no longer SINGLE and the world i.e. “the body” becomes dark. This is why Jesus said if the eye is single (the right eye) the body is full of light, but if the eye is evil (meaning married to the left eye) the whole body will be full of darkness.

God designed an eclipse to look like a wedding ring in the sky as an analogy to represent a marriage between the right and left eye. The right eye is no longer SINGLE when it marries the left eye, and it causes the body to become dark. In the same way when the sun marries the moon during an eclipse the world becomes dark.
IT’S IMPORTANT TO NOTE: The right eye being the sun and the left eye being the moon may sound like New-Age or occult teaching, but actually the Bible said it first. The devil steals things from the Bible, twists them, adds things to them, and creates his own religions with them, as if he came up with them. So now whenever someone hears certain things like this, they might assume it’s occult or New-Age. The devil also makes people think the Bible is nothing more than a book recycling what the occult has already been teaching for years to discredit the Bible. Do NOT get your teaching from the occult or the New-Age. Those teachings are dangerous and lead to Hell. GET YOUR TEACHING FROM THE BIBLE ONLY.

Comparing the following verses with each other will prove Jesus was talking about the right eye as the light of the body.

(Zechariah 11:17) Woe to the idol shepherd that leaveth the flock! the sword shall be upon his arm, and upon his RIGHT EYE: his arm shall be clean dried up, and his RIGHT EYE shall be UTTERLY DARKENED.

Now compare that to this verse about THE SUN being darkened: (Matthew 24:29) Immediately after the tribulation of those days shall THE SUN BE DARKENED, and the moon shall not give her light, and the stars shall fall from heaven, and the powers of the heavens shall be shaken:

Now compare those to this verse and understand it’s talking about the same thing: (Matthew 6:22-23) The light of the body is THE EYE: if therefore thine eye be SINGLE, thy whole body shall be full of light. But if thine eye be evil, thy whole body shall be FULL OF DARKNESS. If therefore the light that is in thee be darkness, how great is that darkness! 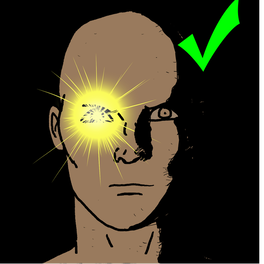 It’s clear Jesus was comparing THE SUN to THE RIGHT EYE, and it’s the light of the body. 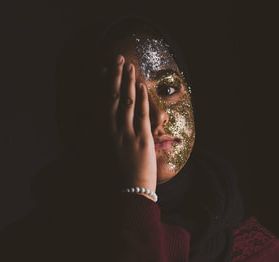 Celebrities cover their right eye with their hand is because it represents blocking out the sun, i.e., the light, because they serve Satan, who hates the light. 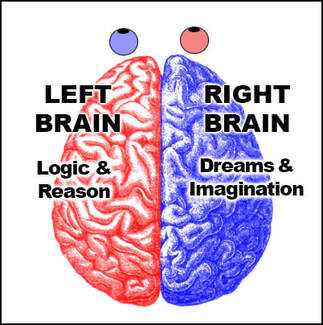 The RIGHT EYE is controlled by the left brain, which is the side of logic and reason, which is light. The LEFT EYE is controlled by the right brain, which is the side of dreams and imagination, which is darkness (according to the Bible). These two sides don’t mix. Light and darkness don’t mix. They need to be separated and SINGLE from one another. If they ever married (like an eclipse), the darkness from the right brain would infect the light of the left brain, turning them both dark -darkening a person’s logic and reason -basically turning them into a LUNATIC (hence the word “lunar” as in moon). Such a person wouldn’t be able to separate fantasy from reality, which could quickly turn into a nightmare. This is why Jesus said: “The light of the body is THE EYE: if therefore thine eye be SINGLE, thy whole body shall be full of light. But if thine eye be evil, thy whole body shall be full of darkness…”
The RIGHT EYE represents the day and being awake. It represents reality. The LEFT EYE represents the night and being asleep. It represents dreams. Dreams and reality should never mix. The dreamworld should never merge with this world. Dreams should never become true. The idea of “dreams becoming true” is evil. If dreams come true, that means nightmares come true too. And who wants that?

So what was Jesus really getting at? He was basically saying don’t let your dreams come true. Don’t let fantasy become reality. Cast down imaginations. “Casting down imaginations, and every high thing that exalteth itself against the knowledge of God, and bringing into captivity every thought to the obedience of Christ;” (2 Corinthians 10:5)

So, exactly how would one merge their reality with fantasy? How would one merge their right brain with their left brain? It could happen with TECHNOLOGY. Think of where virtual reality is headed and where it will be fifty or even ten years from now. People will have probably merged their brains with it by then, unable to separate fantasy from reality, living in a virtual world of pure imagination, void of reality, logic and reason, overcome by the moon, turning them into a LUNATIC.
Jesus was warning us NOT to merge with technology because it would darken your world. Don’t merge with metal. But the rebellious will do it anyway, as prophecy says…

(Daniel 2:43) “And whereas thou sawest IRON MIXED WITH MIRY CLAY, THEY shall MINGLE themselves with the seed of men: but they shall not cleave one to another, even as iron is not mixed with clay.”

The unicorn horn represents imagination, and it protrudes out of the 3rd eye in the forehead. When the right eye merges with the left eye, it opens the 3rd eye and the unicorn horn comes out of it or is “birthed” out of it. The Washington Monument (designed by the powers that be who speak in code) is a perfect illustration of this concept. Washington DC represents A HEAD because it’s “THE HEAD” of the country. At the base of the Monument are two circles merging representing the right and left eye coming together. In the middle is a “mandorla” which represents the 3rd eye. Out of it protrudes a HORN, which is birthed out of that eye. That HORN of imagination represents the ANTICHRIST and his dark kingdom, when reality and the dream world become one.
The 3rd eye or “pineal gland” is what releases melatonin, putting one to sleep. Jesus associated SLEEP to DEATH when He said: “... Our friend Lazarus SLEEPETH; but I go, that I may awake him out of sleep. Then said his disciples, Lord, if he sleep, he shall do well. Howbeit Jesus spake of his DEATH: but they thought that he had spoken of taking of rest in sleep. Then said Jesus unto them plainly, Lazarus is DEAD.” (John 11:11-14)

Therefore, the 3rd eye is associated with SLEEP and DEATH, not the light. 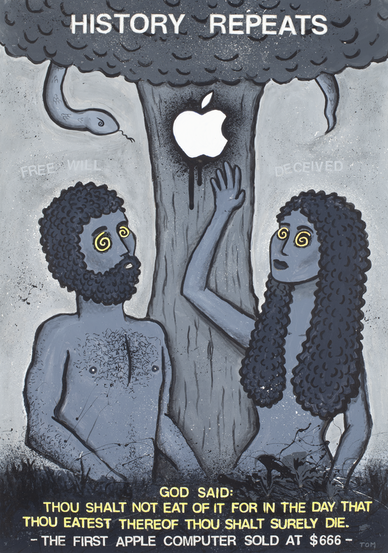 God told Adam and Eve NOT to eat from the tree of knowledge of good and evil or else they would die. The serpent tricked them into eating from it anyway, their EYES OPENED (think of the 3rd eye), and they died. Now, who is it trying to get mankind to open his 3rd eye? Who is behind trans-humanism? Who is it that wants man to mingle his seed with technology, in other words, “EAT” technology? It’s that same serpent from the garden of Eden. Now he’s twisting scripture trying to get people to open the 3rd eye.
Apple computers have an APPLE logo with a bite out of it representing the forbidden fruit from the garden of Eden. What if one day man merges his brain with Apple? It would be the same as eating it. It would be the same trick from the garden of Eden all over again when they ate the forbidden fruit. Scripture says there’s nothing new under the sun.
When Jesus said the light of the body is THE EYE, He meant the RIGHT EYE, not the 3rd eye. He was warning us NOT to merge with technology - not to merge with fallen angels. He was warning us to keep fantasy and reality separate - to keep the RIGHT EYE separate and SINGLE from the left eye.