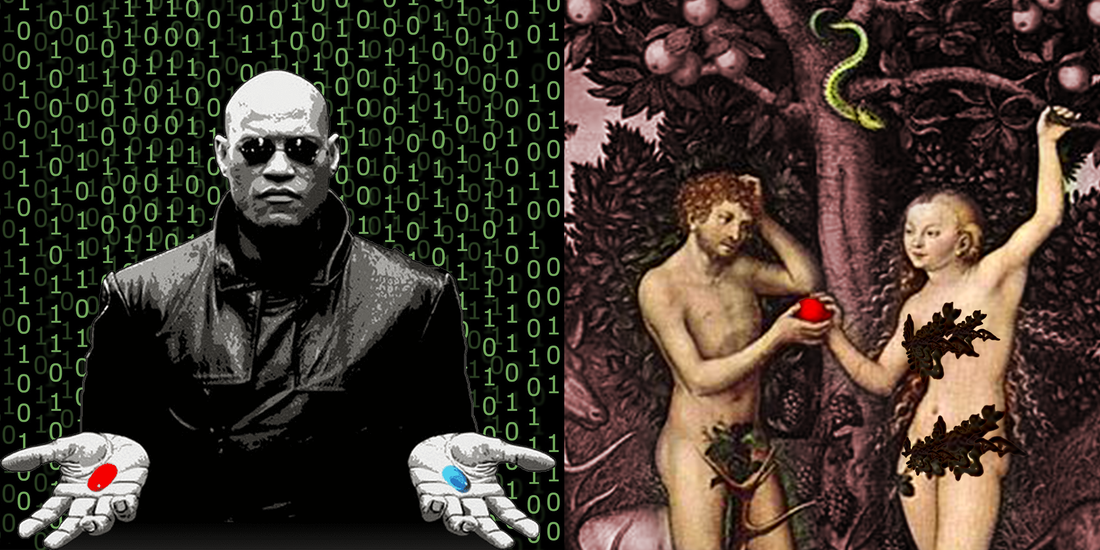 The oldest trick in The Book (The Bible) was when the serpent got Adam and Eve to eat the forbidden fruit and open their eyes. That led to the death and downfall of humanity and we have been suffering from their decision ever since. As soon as they ate the fruit, their eyes opened and their reality changed. They then left the garden of Eden and entered a miserable wilderness. That story sounds a lot like the Matrix movie. Morpheus, who wore a reptile skin jacket (representing the serpent) got Neo to take the red pill (representing the forbidden fruit). Neo's eyes opened and his reality changed. Then he left his world and also went into a miserable place.

The Matrix movie resonates with many of us because deep down we know something isn’t right about our world. The truth is we do live in something like a matrix BUT the mistake would be trying to exit it, the wrong way that is. There’s the right way to exit our matrix and the wrong way. The right way is to wait till we die and angels take us to heaven. That’s if you're saved. Otherwise, you’ll go to the other place. Or, we can wait till Christ returns and takes us out of here. That’s the right way to exit the matrix. The wrong way is through New-Age practices such as opening your 3rd eye. (Remember, the serpent tricked Adam and Eve into opening their eyes, just how the New-Age is tricking people to open their 3rd eyes.) Uploading your consciousness to the internet and becoming trans-human would also be the wrong way to exit the matrix. And if you're one who thinks you can get around the "ice wall" or bust through "the dome", that would also be the wrong way to exit the matrix.

The serpent told Adam and Eve they wouldn’t die if they ate the forbidden fruit (Genesis 3:4). He lied because they died. That was mankind’s “first death”. "For as in Adam all die…” (1 Corinthians 15:22) Whoever exits the matrix again (the wrong way) will die the second death in the lake of fire. "And death and hell were cast into the lake of fire. This is the second death.” (Revelation 20:14)

So, how did we get in this matrix? We got here when Adam and Eve ate the forbidden fruit, opened their eyes and left the garden of Eden. They then entered the wilderness, which is the matrix we now find ourselves in. Yes, this place can be miserable, but it's the punishment we must endure for Adam and Eve's sin, and we must stay here until we get exited out the right way.

To exit the matrix (the wrong way) is the oldest trick in The Book, and now the idea is repackaged in the form of a movie "The Matrix". That movie is setting people up to exit reality the wrong way, which leads to Hell. This shouldn't be a surprise considering it comes from satanic Hollywood. So, don’t be deceived! The right way out of this place is when we die or when Christ takes us. That's it! Any other way is a trick that leads to Hell.

One last thing, the Antichrist will pretend to be the real Christ and possibly lead people out of this matrix. He will likely deceive the world into believing that an "Entity" trapped us here, and will lead the world into battle against this Entity. But actually, it will be God Almighty they'll be fighting. This may be the battle of Armageddon described in Revelation 19:19. So, we need to know the real Christ from the false Christ. To know the difference, we must become a born-again Christian and study the Bible.