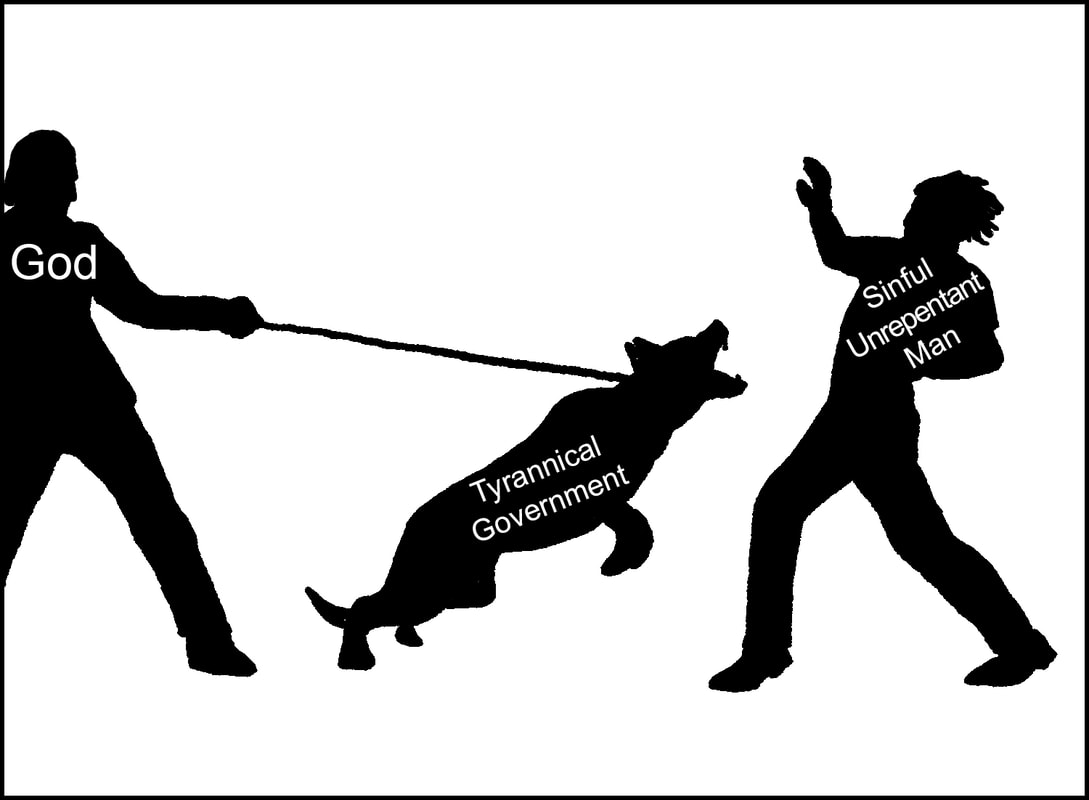 ​1.) God Ordained the Government. “Let every soul be subject unto the higher powers. For there is no power but of God: THE POWERS THAT BE ARE ORDAINED OF GOD.” (Romans 13:1)

2.) God Selects our Rulers, Whether Good or Evil. “…he removeth kings, and setteth up kings…” (Daniel 2:21) “…the living may know that the most High ruleth in the kingdom of men, and giveth it to whomsoever he will, and setteth up over it the basest of men.” (Daniel 4:17)

The government is God’s TOOL that He uses to bless or punish society. It’s basically His attack dog He releases on those who do evil. If we legalize sin, He’ll send the attack dog. The more we do it, the more vicious the dog will be. And if you think the government is bad now, you haven't seen anything yet because it can get so much worse!

There is the right way to fight an evil government and the wrong way. The right way is to obey God and stop anybody trying to legalize sin. The wrong way is to fight the government itself. That’s like trying to fight God’s attack dog who has orders to attack you. In doing that, you’re only fighting what God ordered, and you will fail. And it may even make God angrier so He sends a more vicious dog after you.

There’s a popular meme floating around with old rich guys playing a game on people’s backs with the words: “All we have to do is stand up and their little game is over”. Whoever made that meme doesn’t know how it works, or they’re purposely deceiving people to get them punished even more. “Standing up” is NOT how you fight, repenting and kneeling down in prayer is.
Unfortunately for Christians who do the right thing, we have to get punished along with everyone else, the same way the Israelites (who obeyed God) got led away captive along with the rebellious ones. God told Israel they’d BETTER obey Nebuchadnezzar (an evil ruler who God sent against them to govern them and punish them) or else God would punish them even worse (((READ Jeremiah 27:6-8))). In the same way, we must submit to our tyrannizing government. BUT ONLY as long as it doesn’t tell us to sin or disobey God. If it does, then we CAN disobey it!! This includes NOT taking their vaccines, the mark of the beast, or bowing down to their gods. That’s when we draw the line, just as Shadrach, Meshach and Abednego didn’t bow down to the image Nebuchadnezzar set up (See Daniel Chapter 3).