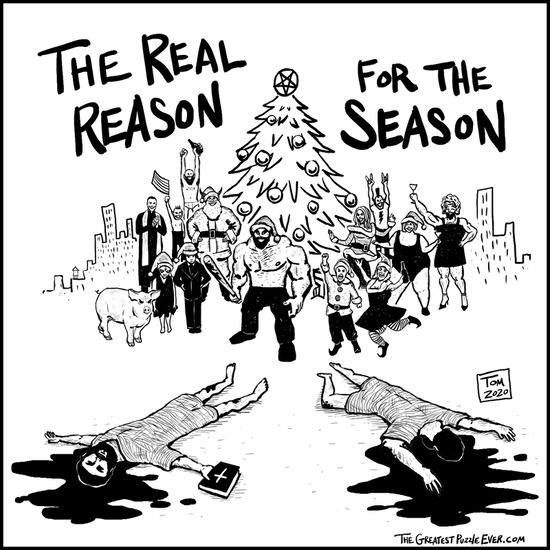 First off, the Bible never says Jesus was born on December 25th. To say He was, is a lie. By celebrating His birthday on that day sends the message that He was born on that day, which only perpetuates the lie. With that said, Christmas is a time when people make merry and send gifts to each other. But what is the real reason for the season? Let’s go to the Bible and find out. Look up: “making merry” and “sending gifts”.

(Revelation 11:10) And they that dwell upon the earth shall rejoice over them, and MAKE MERRY, and shall SEND GIFTS one to another; because these two prophets tormented them that dwelt on the earth.

​(Revelation 11:7) And when they (the two prophets) shall have finished their testimony, the beast that ascendeth out of the bottomless pit shall make war against them, and shall overcome them, AND KILL THEM.

Therefore, "Christmas" is about a future celebration when the world kills God's two prophets. And who are these two prophets?

(Revelation 11:3-4) And I will give power unto my two witnesses, and they shall prophesy a thousand two hundred and threescore days, clothed in sackcloth. These are the two olive trees, and the two CANDLESTICKS standing before the God of the earth.

(Revelation 1:20) “...the seven CANDLESTICKS which thou sawest are the seven CHURCHES.”

Therefore, it appears, and it's my belief, that the two witnesses are churches i.e. CHRISTIANS, many Christians. This means the reason for the season is a celebration of the future genocide of Christians. This also means when Christians celebrate Christmas they're actually celebrating their own death. The Bible says Satan deceives the whole world, even Christians who don't study the Bible.
The word "Christ-Mass"
According to Catholicism, “Mass” has to do with the "eucharist" and the "death sacrifice of Christ". Therefore, Merry Christ-"Mass” means Merry Christ-"death” or Happy "death" of Christ.

Christians are the body of Christ.

Christians are the body of Christ. When the world kills Christians (Revelation 11:7-10) they will be killing a part of Christ Himself. (Now, Christians aren’t Christ, but only represent His body on earth). So if Christ’s body dies, it would be a “death" of Christ or a Christ-"Mass”, i.e. "Christmas".

The word “Mass” also comes from the word “missa” which means to dismiss. Therefore, Merry Christ-"mass” means joyful "dismissal" of Christians. The world will joyfully dismiss Christians from the earth by killing us. This shouldn’t be a surprise considering that the world already hates Christians (real Christians that is).
The Christmas Tree
The Lebanon flag has a tall cedar tree that looks like a Christmas tree. People commonly use triangle shaped cedar trees for Christmas trees.

The Bible speaks of a “tall cedar tree of Lebanon”.

(Ezekiel 31:3) Behold, the Assyrian was A CEDAR in Lebanon with fair branches, and with a shadowing shroud, and of an high stature; and his top was among the thick boughs.

This Assyrian/cedar tree is Lucifer.

(Ezekiel 31:16) I made the nations to shake at the sound of his fall, when I cast him down to hell with them that descend into the pit: and all the trees of Eden, the choice and best of Lebanon...

Compare that verse to the following verse to know God's talking about Lucifer.

(Isaiah 14:12-15) How art thou fallen from heaven, O Lucifer, son of the morning! how art thou cut down to the ground, which didst weaken the nations! For thou hast said in thine heart, I will ascend into heaven, I will exalt my throne above the stars of God: I will sit also upon the mount of the congregation, in the sides of the north: I will ascend above the heights of the clouds; I will be like the most High. Yet thou shalt be brought down to hell, to the sides of the pit.