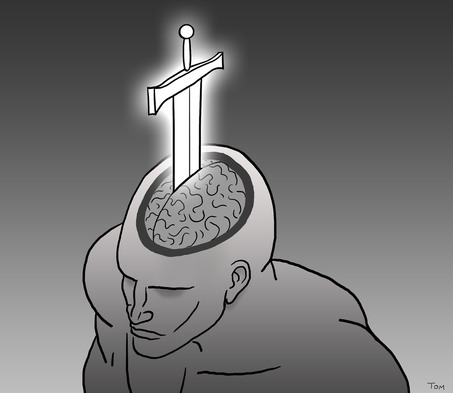 The real meaning of the Sword in the Stone

The “stone” is the skull of Golgotha. It’s the rock and the hill where Jesus was crucified.

“And they bring him unto the place Golgotha, which is, being interpreted, The place of a skull.” (Mark 15:22)

The cross is the sword. Just look at the shape of it. God designed it that way for a reason.

“Then were there two thieves crucified with him, one on the right hand, and another on the left.” (Matthew 27:38)

"And David put his hand in his bag, and took thence a stone, and slang it, and smote the Philistine in his forehead, that the stone sunk into his forehead; and he fell upon his face to the earth." (1 Samuel 17:49)

Golgotha sounds like Goliath because they mean the same thing and both represent sealing the 3rd eye shut.

​This “eye” opened when Adam and Eve ate the forbidden fruit, and their “eyes” opened (their 3rd eyes). That eye caused death in the human race. But Jesus sealed it shut with His cross. Jesus brings life back to the human race, to all those who believe. This is the deeper meaning of these scriptures. It’s all in code.

For more on this, visit “Where’s the bottomless pit?”